Well, now I know what ''peak'' season in the accommodation industry is all about - it's called February! My great giddy aunt - I have lost count of the linen I've laundered, the beds I've changed and the brekkies I've made over the past few weeks. But it's been amazing - so many people from all over the world have stayed. And I challenge anyone to make a bed quicker than I can!
This morning I woke to the most gorgeous sunrise - so I hauled myself out of bed, fumbled around for the camera and tip toed out onto the balcony to see what I could get. It was so beautiful, and it never fails to amaze me how quickly a sunrise or sunset changes and is gone. 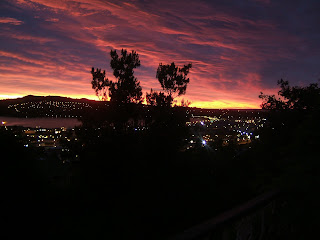 Haven't had quite so much stitching time lately but this week I did start and finish block five of Vero's mystery quilt - I have to admit that once I start one of her blocks I become a little ''addicted'' for a couple of days until it's finished. I love the way it starts out ''raw'' and then changes as all the little details and finishing touches are added. This month, this block is my favourite. 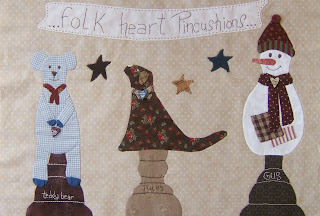 I'm half way through the first block of Brenda's quilt - it is truly divine. I'll show you soon.
On Friday I did something that I haven't done in years! I was dusting upstairs - and no, thats not the ''something'' though it was starting to look a little obvious that I hadn't dusted in a few weeks and the girls were coming for stitching! Anyway, as I was dusting the piano I lifted the lid and ran my fingers across the keys. It really has been more than ten years, I would say, since I last touched a piano. So I found a very old piece of sheet music in the piano stool, and sat and started to play - pretty rusty for the first few lines of music, but then it all came back! How amazing, I thought - you don't forget. And it was lovely - not the way I was playing 'cos that wasn't the best - but it was just lovely to play again. The piano came with the house so I was pleasantly surprised to find out that it has a fabulous tone, and I think I just might play a little more. Go and do something you haven't done for years and years - it gives you a real buzz, to know that you can still do it, and that you still like doing it! And you wonder why you ever stopped doing it! 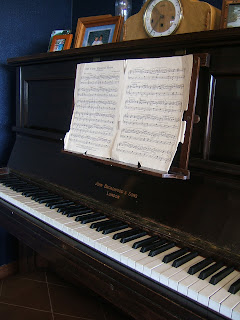 Oh, and the postie was good to me again this week - this was his treat for me - Robyn Pandolph's new Beach House range of fabric. Yum!!! Fat quarters and charm sqaures in the most heavenly pastel colours and prints. 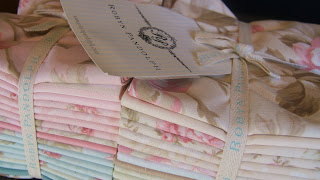 The firewood saga continues... I was determined to have all my firewood delivered and stacked by the end of February and yesterday I realised that it was the 27th February!!! I had calculated I needed two more loads so I bit the bullet and got both loads at once. Seemed like a good idea at the time until I waltzed down the steps to see the biggest pile of firewood. It may not look so big in this photo.... 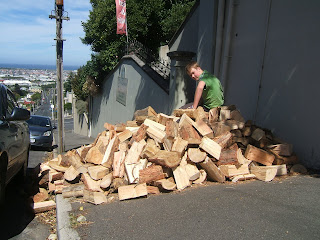 ... but believe me - it was BIG!!! For what seemed like hours we didn't even make a dent in it but then finally there was light at the end of the tunnel, or in this case, wood stack. We trudged up and down the steps and garden for four long hours, minus a few short jellybean revival breaks. A handful of giant jellybeans every so often eases the pain! So, now it's done - all neatly stacked and I only hope there is enough 'cos I don't want to do this again until this time next year. I have to be very honest and admit that I am feeling my age today - was a little sore first thing this morning - discovered a few muscles that I didn't know I had - cruel and unusual punishment it is!! It took a little more than jellybeans to encourage Jake to participate this time - when the load was delivered he just looked at me as if to say ''are you mad?'' and shook his head. Monetary enticement was called for!

I have a movie lined up for tonight - and stitching - finishing off a couple of things. Have a lovely stitchy week.

The last time I was here it was a glorious blue sunny sky day - same again today! Maybe I should be out there, in the garden, or just relaxing with a cuppa on the front porch. The second option sounds good - gathering strength for the next job on today's agenda - carting another load firewood up the stairs, and then up through the garden, and then stacking it up under the house (there are way too many ''ups'' there!). Yah - I can't wait until the delivery man turns up with it!! I have been a little cunning though and suggested that he deliver it mid to late afternoon - like about about after 3.00 p.m. Sorry Jake!
I've started to do a little work on some of this years classes. We did some vintage Christmas decorations last year, and they were fun. So I've decided to do another four this year. Have been thinking about what to do for ages, and I've finally settled on the next four. Here's the beginnings of three of the four... 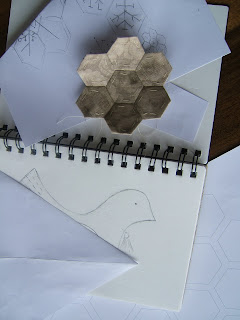 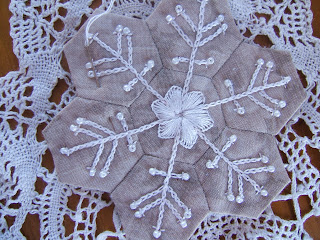 ... and it's finished up as another class project. I used a new range of fabrics - "Old Primrose Inn" by Blackbird Designs - gorgeous soft colours and old-fashioned florals. 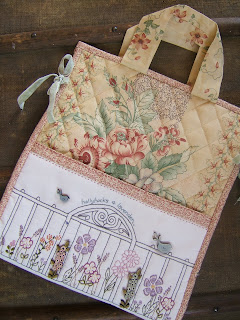 Plenty of pockets to store absolutely everything. 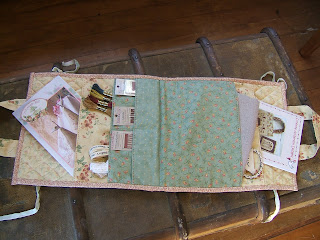 The Gingham Girls got an outing, too. Have half finished block ten - this is such a pretty little block.... 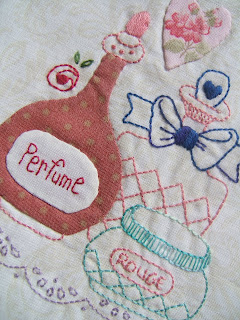 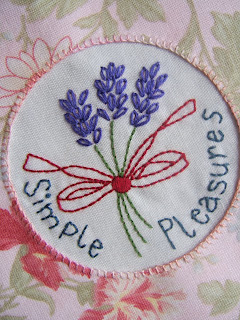 I have to show you a couple of things that the postie delivered this week cos they are gorgeous! The first parcel had a pile of buttons from House on the Hill - what do you think? Aren't they beautiful! 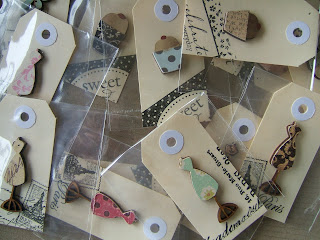 And then there was this! This is not my stitching but a picture of part of Brenda Ryan's most delicious new quilt, Jane Austen's Bonnets (this is one of my block of the month quilts this year). I'm going to be stitching this tonight - I know I shouldn't start something else quite yet, but this is completely irresistable - I just have to do a little! 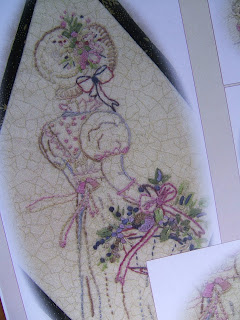 Not quite finished with the postie yet - she also delivered a parcel from France - new cross-stitch patterns by Virginie Gousse. Her designs are truly exquisite -I just had to have them! It was so hard to choose just one to show you, but they will all on my website in a couple of days (http://www.thestitchery.co.nz) 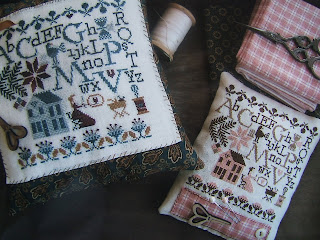 So, the postie was good to me this week - a whole lot of goodies (and not too many bills!). Must scoot now, as the firewood will nearly be here - such fun awaits!!!
Happy stitching
Jenny
Posted by Jenny at 1:40 PM 5 comments: