A few of my favourite things...

These are a few of my favourite things right now - Songs of Spring - one of the little stitcheries from the new quilt of Lesley McConnell (faeriesinmygarden.com.au). 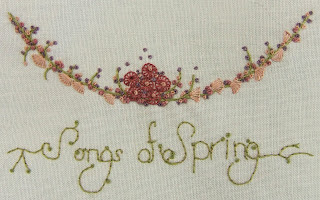 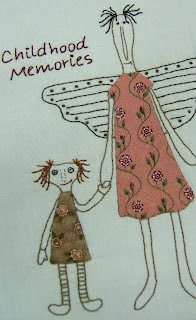 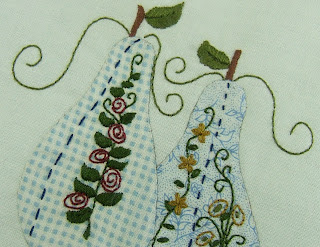 Christmas - always one of my favourite things - this gorgeous Santa is from a new panel just in. 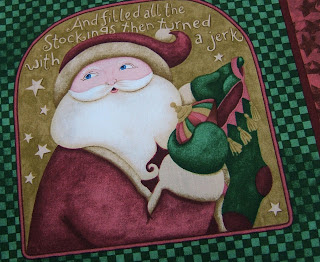 And this has always been one of my most favourite stitcheries - fabulous pre-printed stitchery from Angels in Disguise. 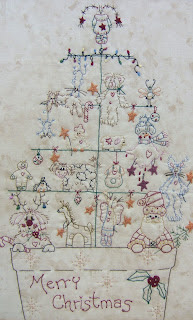 Favourite fabric this week? Hard to choose but possibly this red and white story. 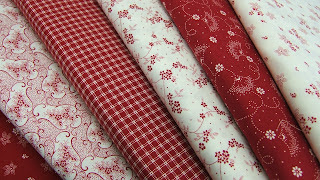 Favourite flower - apple blossom! Wistful thoughts of spring - my favourite season! These chilly nights, though, are the perfect excuse to grab your stitching, get close to the fire, and stitch into the night. Happy stitching.
Jenny.
Posted by Jenny at 10:48 AM 2 comments:

I couldn't resist showing you the latest range of fabric I have from Moda - ''Hemming House'' by Brannock and Patek. Wonderful reds, teal, aqua, tan and blacks. When ordering from this range, I couldn't decide what to leave out, so got the lot! 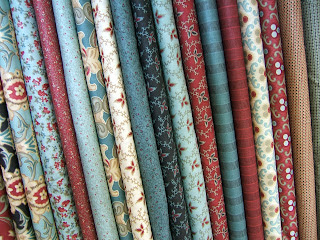 Here's a photo of the girls from one of the Christmas Club's, showing off their finished Treetop Angel - gorgeous pattern of Rosalie Quinlan's. 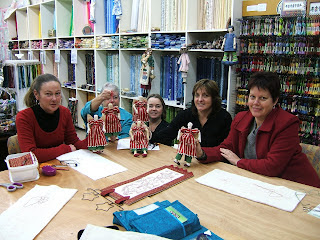 And here's a snippet of the redwork stitchery they started this week. Cute little elves this time. 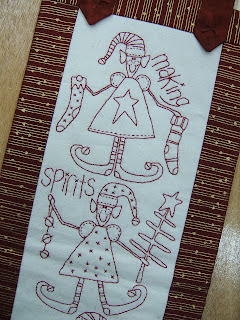 I've been working on the stitchery blocks for Lesley McConnell's latest block of the month quilt, Songs of Spring. I am loving the stitchery as Lesley as used a wonderful variety of embroidery stitches. I even had to get out my ''Elegant Stitches'' last night to find out how to do one - coral stitch - really simple but I hadn't done it before and I love the effect. So here's a peek at "The Flower Gatherer'' 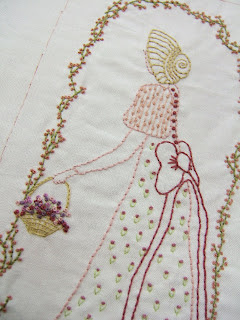 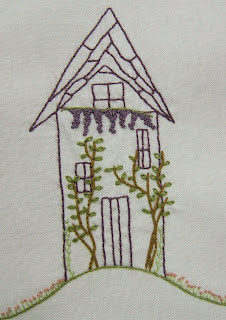 This is an adorable baby blanket made by Lynette - wonderful use of Kaffe's fabrics and don't the birds look amazing. 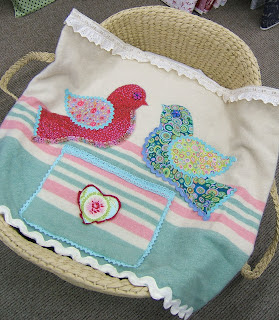 I also would love to show you Debbie's latest projects - these are from the Homespun magazine - this is a design of Jackie Nicholls of House on the Hill Designs (I showed you her latest patterns a couple of weeks back). I love Debbie's bright version of the trees. 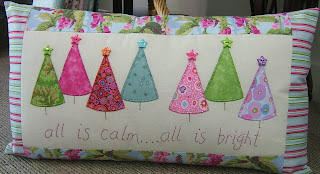 This design of Natalie Lymer, stitched by Debbie, follows her style of the Truly Scrumptious girls. 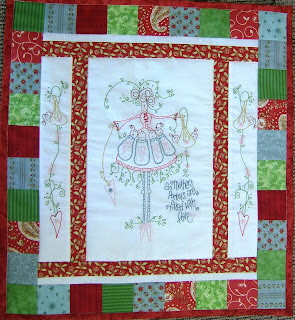 Well, that's it for just now. I'm off home to start work on a certain doll, and a bit more stitching for Songs of Spring.
Jenny

Well, the strippers club met last Friday night and we got started on ''the quilt''. Everyone had a little homework to do before the night, and that meant cutting 128 small squares - except for one person who shall remain nameless who had decided to do a larger size of the quilt, so she had to cut 236 squares instead! The girls spent the night sewing and cutting and I spent the night pressing. You can just see the quilt draped over the noticeboard in the corner of the photo. There will be another couple of nights yet to get it completed so round two is coming up on Friday 13th! We all learnt the meaning of a ''scant'' 1/4'' seam allowance that night. 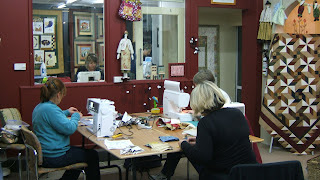 At stitching group that same Friday afternoon, Debbie brought along the most gorgeous little stitched table runner that she had done, using a Hatched and Patched Pattern called ''My Angel Garden''. How cute are these angels? 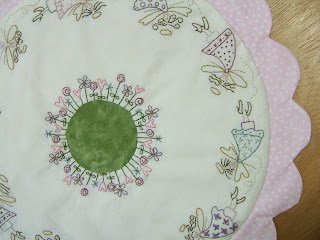 It's been a busy week with the Red Club meeting on Tuesday and Wednesday nights. A couple of the girls brought along their finished ''Red Delicious'' cushions from last month - love the darker border of Carol's one and Margaret had done a neat little tie at the corners of her cushion. 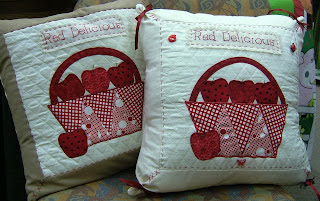 So, this week we learnt to do English paper piecing with a simple little bag project. 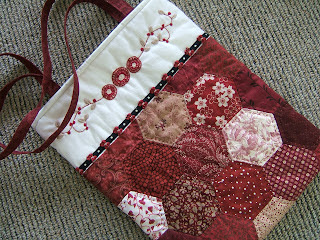 This was my evenings entertainment last Monday night - have wanted to make up this pattern for ages - French Inspired Cats (one of the Woodcutters Daughter patterns) - it's been sitting on my sewing table for quite a while - so rummaged through the stash, found my template plastic and got cutting and stitching and stuffing! In no time I had a dozen or so cats ready for their neckties! Pretty cute, I thought. 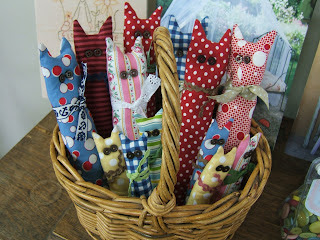 There has been some fabulous new ranges of fabrics come in this week so will post a couple of pictures of them next time. Until then, happy stitching.
Jenny
Posted by Jenny at 9:19 AM 2 comments: